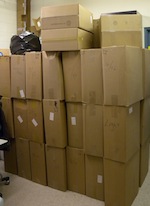 RCMP made a significant seizure of contraband cigarettes on the Trans-Canada Highway near Portage la Prairie on Friday.

A member of the Portage la Prairie RCMP made the discovery after pulling over a vehicle from Quebec on February 5 at around 1 p.m. The vehicle was travelling west near Road 31 at the time and had tinted windows and no front plate. Originally being stopped for the equipment violation, police observed the driver of the 1997 GMC 2500 truck was in possession of a pack of contraband cigarettes.

A 50-year-old man from Quebec has been charged and will appear in Winnipeg Court on March 25.