Home » News » Can You Really Be Bored to Death? Researchers Think So

Can You Really Be Bored to Death? Researchers Think So 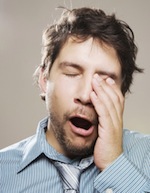 The expression ‘bored to death’ is no longer just a saying, according to researchers in London.

New information to be published in the International Journal of Epidemiology in April suggests there is a link between how bored you are, and how early you’ll die.

Researchers took data collected between 1985 and 1988, which questioned 7,500 people aged 35 to 55. Participants were asked if they had felt bored at work during the previous month.

In April 2009, those participants who were still alive and reported to have been very bored at work, were two and a half times more likely to die as the result of a heart problem over those who did not report being bored.

The effect was reduced based on physical activity levels and employment grade.

Other experts said while the research was preliminary, the link between boredom and increased heart problems was possible, if not direct.

— With files from UPI