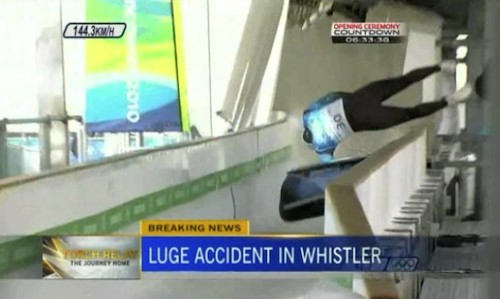 Georgian luger Nodar Kumaritashvili died Friday after he crashed during a training run at the Whistler Sliding Centre in preparation for the Vancouver 2010 Olympic Winter Games.

The video was quite disturbing and showed the body of the 21-year-old being thrown off the track at 144 kilometres per hour.

It is with great regret that we confirm the death of the Georgian luge athlete, Nodar Kumaritashvili, during the final training session at the Whistler Sliding Centre, this morning.

Mr Kumaritashvili died after crashing on the last corner of the course during training. Doctors were unable to revive the athlete, who died in hospital.

“Our first thoughts are with the family, friends and colleagues of the athlete. The whole Olympic Family is struck by this tragedy, which clearly casts a shadow over these Games”, said the President of the International Olympic Committee (IOC), Jacques Rogge.

“We are deeply struck by this tragedy and join the IOC in extending our condolences to the family, friends and teammates of this athlete, who came to Vancouver to follow his Olympic dream”, said John Furlong, the CEO of VANOC, the Games Organising Committee.

For the International Luge Federation, President Josef Fendt said: “This is a terrible accident. This is the gravest thing that can happen in sport, and our thoughts and those of the ‘luge family’, are naturally with those touched by this event.”

An investigation is underway into the circumstances of the accident. Training was suspended and technical officials are now trying to establish the causes.