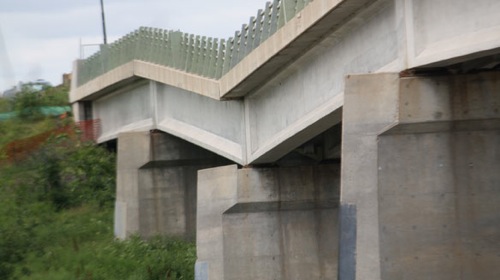 The Pierre Delorme Bridge near St. Adolphe is still very much out of commission, but residents are managing the winter months without it. They have no choice.

The bridge was closed last August due to structural deficiencies which posed safety concerns. Crews dismantled the affected parts and have been working to repair it ever since.

There was talk about creating an ice road over the Red River to make it easier for commuters to make it on to Highway 75 and travel into Winnipeg without a lengthy detour. A clearing in the brush nearby was used decades ago for that very purpose, but thin ice and open patches of water put to rest any plans of duplicating such a road this year.

Area resident Glenn Sigurdson told ChrisD.ca on Thursday that, ideally, an ice road would have been preferred, but he understands why it couldn’t be developed. “I guess if it’s not safe, there’s nothing you can do. St. Mary’s Road is my daily route now, but hopefully it’s reopen (the bridge) soon.”

St. Mary’s has become the lifeline for access into the community, and traffic has increased significantly because of it. Area businesses and homeowners south of the Perimeter Highway have taken notice, but depending on whom you ask, opinions vary on whether it’s a good thing. One homeowner we spoke to made mention of motorists whizzing by at high rates of speed, especially with a school bus stop nearby.

The Province of Manitoba has tendered and awarded a contract to a company responsible for completing the first phase of repairs, which are underway and going well.

“As the first phase continues, the remaining work will be tendered in a couple of months and, weather permitting, will be done as quickly as reasonably possible over the summer and early fall,” a provincial spokesperson said in an e-mail earlier this week.

Residents living in the area of St. Adolphe, who used the bridge daily until its closure last summer, have recently raised concerns with the RM of Ritchot on when work will be completed. It appears the structure will be up and running again as early as the fall if construction remains on schedule.