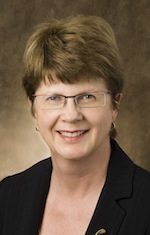 A new president and chief executive officer for the Winnipeg Regional Health Authority has been appointed to replace the retiring Dr. Brian Postl.

Arlene Wilgosh — currently the province’s longest-serving Deputy Minister of Health — will assume the role March 22, the WRHA said Tuesday. Following a national search, Wilgosh was chosen for her vast experience in the health industry. Starting her career as a nurse, she went on to lead a number of positions in the health care field, including work in the Intensive Care and Emergency Departments for 13 years.

Wilgosh serves on the board of directors with the Mental Health Commission of Canada, the Canadian Partnership Against Cancer (CPAC) and the Manitoba Health Research Council. She also serves as the Chair of both the Manitoba Nursing Advisory Council and Diagnostic Services of Manitoba (DSM).

Dr. Brian Postl announced his retirement earlier this year, but will remain with the WRHA the next few months to assist Ms. Wilgosh.