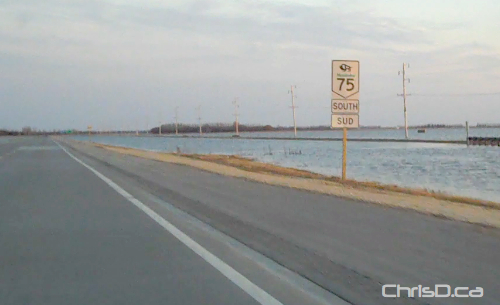 The Provincial Conservatives are criticizing the NDP this morning for not having a solid plan in place to fix the recurrence of flooding along Highway 75 near Morris to the U.S. border.

The provincial government issued its first spring flood outlook for 2010 on Monday, which calls for ‘significant flooding’ in the Red River Valley.

“Flooding south of Winnipeg is a regular occurrence,” Taillieu said. “We had flooding in 2006. We had flooding last year. We have another flood looming on the horizon for 2010. Yet it seems that each year after the flood waters subside, we hear much talk from the NDP about plans to fix the problem, but we have yet to see any action.”

Taillieu goes on to note the negative impact closing the highway has on Manitoba’s economy, as well as to homeowners in the area.

Highway 75 has been closed in portions 100 days in the last 13 years, compared to eight times of closure on the connecting Interstate 29 in North Dakota over the same time period.

“With CentrePort Canada in the works, hopes to make Winnipeg a major transportation hub for north-south trade will be quickly dashed without a long term plan in place,” Taillieu said.