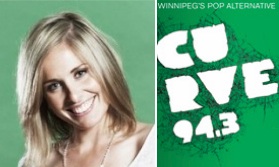 Former CURVE 94.3 radio personality Andrea Collins is on her way back to Winnipeg, she tells ChrisD.ca.

Andrea left in August for 107.3 Kool FM in Victoria, but will soon be co-hosting mornings on CURVE with Jay Richardson on a temporary basis, before moving back to her familiar position doing middays.

She’s back on the air locally Monday, March 15.

Both stations are owned by CTVglobemedia.