The “scandal” surrounding the Canadian women’s hockey team may be over, but a ChrisD.ca reader writes: 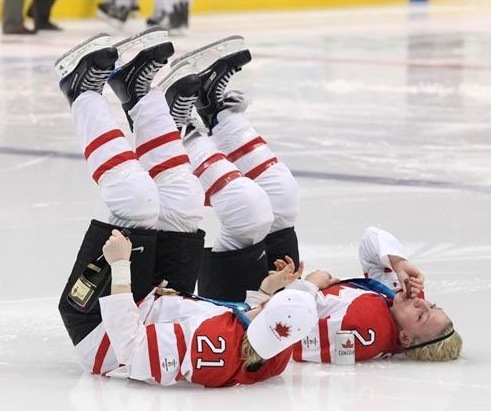 Further to the uproar about the partying at centre ice after winning gold. Maybe one girl was under age for the province, but check out what Ovechkin did in the last Olympics after the Russians won gold against our Canadian guys. Talk about being inappropriate!!! Now did they apologize for hacking up the ice, cutting our cdn loonie in half and he even had the nerve to wear the cut up halves around his neck. Now if any one needs to do some apologizing, it should be the whole Russian Team and the arrogant Ovechkin.

This was aired just before the Cdn-Russian game. They even showed him wearing the Loonie as jewellery around his neck. Whats wrong with this picture???

As far as I am concerned the ladies on the team did nothing wrong. They didn’t deface the ice, deface a national coin and certainly did not flaunt in front of the whole world.

Shame on the Hockey league for allowing Ovechkin to even play and wear his “jewellery” until he had apologized to the whole world! Instead they actually made a whole “piece” about him just before the game!!!!!