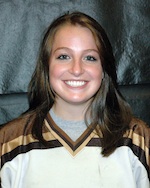 A rookie Manitoba Bison defenceman has been named to Team Canada’s Women’s Hockey Under-18 Team.

Hockey Canada announced Monday the addition of Caitlin MacDonald (right) — a first year Bison from Winnipeg who will play at the 2010 IIHF World Women’s Under-18 Championship.

The championship takes place from March 27 to April 3 in Chicago.