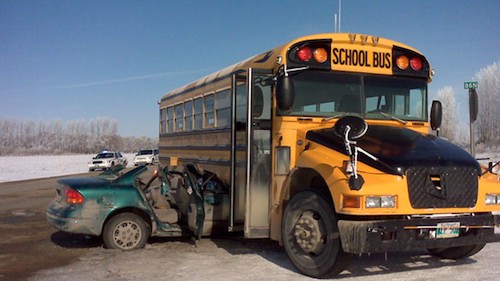 A school bus was involved in a crash at approximately 8:25 a.m. Wednesday when a Chevrolet Alero collided into the side of it.

The accident happened about 3 miles north of Neepawa on Highway 5 at the intersection of a gravel road in the RM of Rosedale.

RCMP say heavy fog and poor visibility were reported at the time.

No word yet on any injuries, as police continue to investigate.

UPDATE: 13 children were on board at the time and were taken to hospital as a precaution. None of them were injured. The driver of the vehicle, a 50-year-old woman from Winnipegosis, was taken to Neepawa Hospital, then transferred to the Health Sciences Centre. Her condition isn’t known. The male driver of the bus was not injured.

UPDATE #2: March 4 — The driver of the Alero has succumbed to her injuries. Her name is not being released.