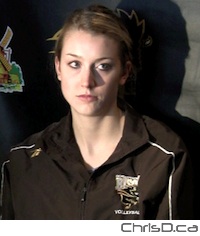 For the second time in her four years as an athlete at the U of M, Manitoba Bison volleyball player Ashley Voth has been named as a CIS First Team All-Canadian for 2009-10. Voth first received the honour for 2007-08.

The 21-year-old Winnipeg native has been one of the top players in the country the entire season.

Voth led the team with 206 kills, second with 188 digs, tied for second with 57 overall blocks and third with 16 service aces during the conference regular season.

The Bison women’s team is currently on the road in Edmonton until Sunday and will play at the University of Alberta beginning tonight at 7:30 p.m. CT. The Bisons will play #6 seed University of Toronto. The 2010 CIS Women’s Volleyball Championship will be live streamed at www.ssncanada.ca.