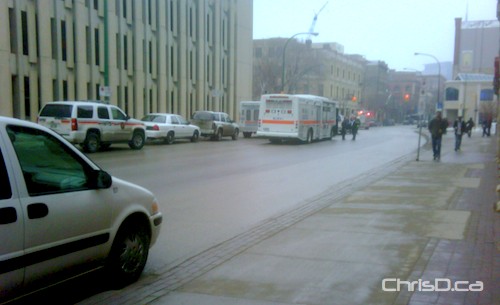 For the second time this week, the Public Safety Building at 151 Princess Street was evacuated.

Reports of an ammonia smell forced the evacuation shortly before 10:30 a.m. Friday when a hazardous materials call was reported.

Earlier this week, staff were evacuated due to breathing difficulties.

Police blocked traffic in the area and rerouted vehicles on to Elgin Avenue while Hazmat crews investigated. Firefighters made their way through the building, checking each floor to determine the cause.

After the first evacuation on Wednesday, fire officials said they would be testing the air quality in the building over the next several days.

UPDATE: 11:26 a.m. — The Major Incident Response Vehicle (MIRV) has been released from the scene, as Hazmat crews examine sewer openings near the PSB. Police believe the smell was caused by a cleaning product in the building’s air ventilation system. The evacuation is expected to last about another hour.