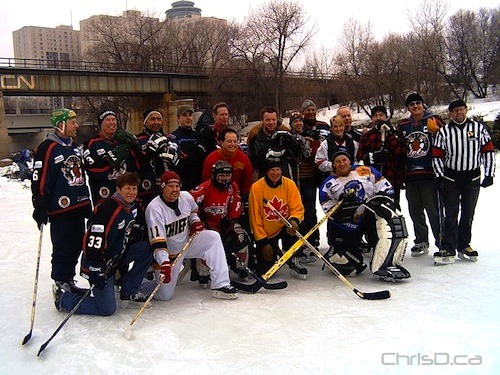 The media tried their best, but former Winnipeg Jets players were too much for them Saturday afternoon in a game of shinny at The Forks.

The jerseys worn by Global TV’s Joe Pascucci and Hot 103’s Ace Burpee were something to be seen — and as you’ll see in the photos below, they were definitely nostalgic.

The famed Avco Cup (1972–1979) from the World Hockey Association was even on hand for photo ops.

As for the players of the game … we’re told Global TV’s Nicole Dubé — who scored a penalty shot — and CTV’s Kevin Olszewski were quite the hot shots on the ice.

We don’t know the final score, but according to Wheeler at Power 97, even though the media team got pummeled, the ref based the win on the last goal scored by the media.