This Lonely One Didn’t Migrate South 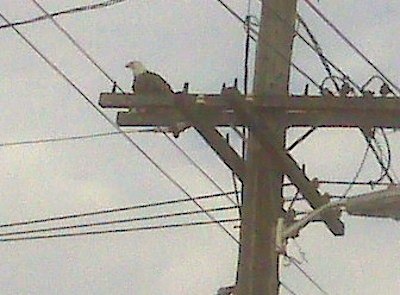 It’s rare to see a number of things in Winnipeg during March, but for the sake of narrowing things down, a bald eagle is at the center of attention in this post.

A ChrisD.ca reader caught this eagle Sunday in Osborne Village. This might very well be the same eagle the Freep’s Bart Kives spotted last week. Whether or not there’s more than one bald eagle in the city at this time of year remains a mystery, but it’s still uncommon. With most open water still frozen over, finding food can be a challenge for these creatures.

Luckily, this fella was seen hanging around close to Carlos and Murphy’s. If it was smart, it could have scrounged for leftover nachos out back.

Fun fact: the bald eagle was once considered an endangered species, but was reclassified as a “threatened” species on July 12, 1995 after its population stabilized again.