Red River to Crest Higher Than Expected in North Dakota 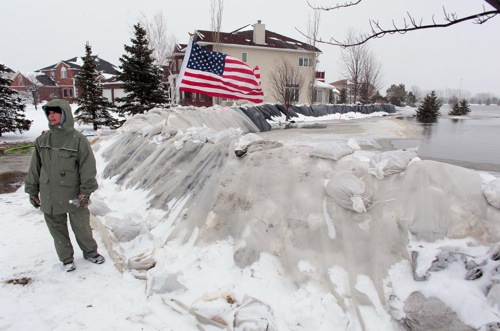 Officials south of the border are preparing for rising water levels on the Red River after new forecast models were released Monday.

The National Weather Service warned Fargo, ND of a higher than expected crest due to warm weather and rain.

The river is expected to crest Saturday approximately 20 feet above flood stage, but 3 feet below last year’s crest.

An emergency meeting was held by city and county officials to discuss their plans, which include convoys of sandbag trucks being directed to Fargo’s lowest areas.

Clay levees are also being constructed, as Fargo’s Mayor Dennis Walaker says the city is prepared to hold back the water.

— With files from MSNBC

← Previous: Need a Job? Citytv Has Plenty of Them Next: Students Get a Taste of Homeless Life →
Tags: Flooding | North Dakota | Red River | United States