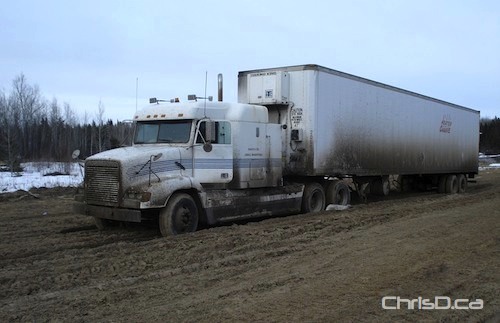 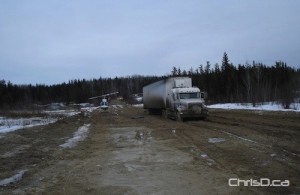 A stranded truck driver was rescued by RCMP Thursday morning after becoming stuck on a muddy road about 65 km south of Oxford House.

Police received word that the driver, who was returning from delivering groceries to Oxford House and God’s Lake, had not been heard from for two days. A helicopter was chartered to locate the 29-year-old driver from Selkirk, who did not have any means of communication to call for help.

The driver was returned to Oxford House to make arrangements to retrieve his truck.

While on the winter road, police located another disabled truck. The driver requested his company be contacted to help him continue on his way.

Many of these roads have been closed for the season, but truckers are still using them to avoid lengthy detours and competing transportation from chartered planes.

In a separate incident, RCMP are currently attempting to rescue 12 people from the communities of Garden Hill First Nation and St. Theresa Point First Nation, who became stranded Thursday afternoon on a winter road while making their way from Winnipeg to the Island Lake Area. The people are stranded about 200 km south of Island Lake.

The civilians made their way to a lodge on Wrong Lake for shelter and appear to be in good health. Earlier attempts to rescue them were stalled by poor weather and visibility.

RCMP have chartered a Beaver aircraft with skis to retrieve the community members and bring them back to safety.

UPDATE: When rescuers arrived to the lodge, the 12 people could not be found. Search and rescue teams have since been dispatched to try and locate them.

UPDATE #2: They found them.