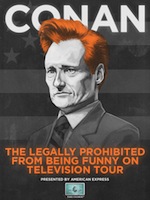 Since Conan O’Brien launched his “Legally Prohibited from Being Funny on Television Tour” a few weeks ago, local fans have been trying to get the comedian’s attention to make Winnipeg one of his stops.

A Facebook group has been set up, and we all know how successful a cause can be if it’s on Facebook. Heck, if it can get Betty White a hosting gig on “SNL”, why isn’t it possible Conan could come to the ‘Peg?

Another one of Coco’s Canadian stops includes Enoch, Alberta, which only has a population of about 1,100 people.

While O’Brien’s television future is uncertain, his popularity here in Winnipeg is a pretty sure thing.

Join the Facebook group. At last check, 3,300 fans were signed up.