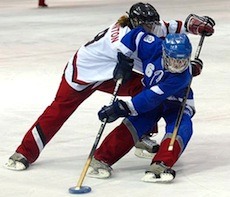 Gateway Arena is set to host the Western Canadian Ringette Championships beginning Thursday. The tournament from March 25-28 will showcase the best ringette teams from the four western provinces competing in the U16, U19 and Open divisions.

Manitoba will have a host team in each division and takes on Saskatchewan to open things up.

Winnipeg last hosted the event in 2006.

A complete schedule of the games is available at WCRC2010.ca.