Home » News » Province Gets Tough on Vehicle and Body Armour

Province Gets Tough on Vehicle and Body Armour 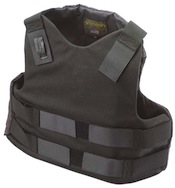 The province is making sure body armour, such as bulletproof vests and armoured vehicles, aren’t used by criminals.

The Body Armour and Fortified Vehicle Control Act makes it illegal for retailers to sell body armour to anyone except police officers, sheriffs, corrections officers and medical personnel. It also bans the armour outfitting of vehicles, such as the implementation of bullet proof glass and other non-essential protective retrofitting.

Individuals in possession of such armour could face a fine of up to $10,000, three months in jail, or both. The fine for businesses not abiding by the law is up to $25,000.

Those still needing the armour would have to apply for a permit and be subjected to a background check before being able to use it.

Armoured vehicles used for policing, prisoner transport, military operations or secure money transfer are not impacted by the new legislation.