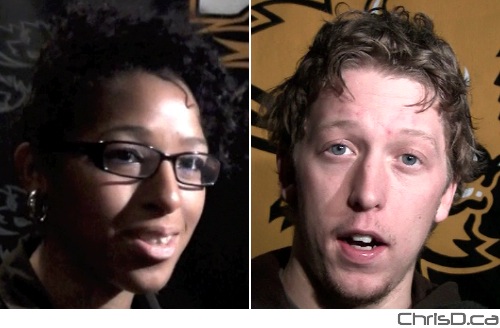 More recognition from the U of M Bisons this week, as they named their 2009-10 Bison Sports Athletes of the Year.

Desiree Scott and Steve Christie were selected for the honours on Saturday.

Desiree Scott, 22, recently wrapped up her soccer career in Manitoba, but not before receiving the 2009 CIS First Team All-Canadian back in November. Earlier this week, it was announced she re-signed with the Vancouver Whitecaps FC women’s soccer for the upcoming 2010 season. Scott’s Bison record mentions an impressive 58 points on 32 goals, while adding 26 assists and playing in 69 out of 77 regular season games.

Steve Christie is no stranger to recognition either. The 25-year-old was just named the 2009-10 CIS Men’s Hockey Goaltender of the Year earlier this week. Christie also started in 27 of 28 conference regular season games and earned the title of 2009-10 Canada West First Team All-Star.

Along with the athlete awards, Bison men’s hockey coach Mike Sirant was named 2009-10 Bison Sports Coach of the Year. Now in his 14th season with Manitoba, Sirant led the team to a run at the CIS Championship for the first time since the 1964-65 season.