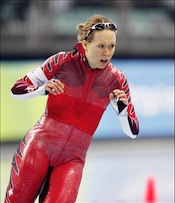 Olympic speed skater Cindy Klassen will return home to Winnipeg on Thursday for the first time since competing at the Vancouver 2010 Olympic Winter Games.

Klassen will meet fans and sign autographs beginning at 11 a.m. in the MTS Connect Store at Polo Park Shopping Centre.

After taking two years off from skating for double knee surgery and to spend time with her sister, Lisa, after that horrendous car accident in 2008, Klassen failed to pick up a medal at the recent Vancouver Games. Despite her performance, she still holds the most medal won at the Turin Games in 2006, picking up five of them and earning the unofficial title as “Woman of the Games.”