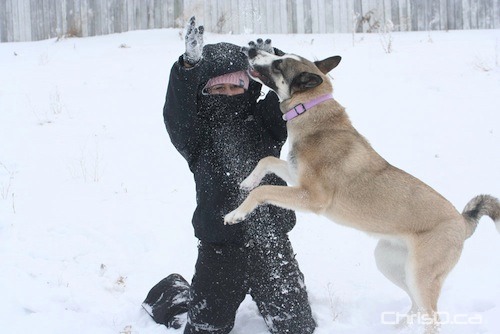 A couple from Churchill has added another beautiful sled dog to their fleet of mushers. Jenafor Ollander and Gerald Azure — who recently gave up their blind sled dog Isobel — have adopted a Husky mix named Powder (above) from the City of Winnipeg’s Animal Services branch.

Powder was a stray wandering the streets of Winnipeg without a license, and was held for five days at the shelter before being put up for adoption in December 2009. The couple spotted the dog on PetFinder.com and agreed to place Powder in foster care before bringing her up north.

The couple recently appeared at the Winnipeg Humane Society with Isobel, a blind Siberian husky-malamute cross, to share her story with the public before retiring her to live with a new family in Alberta (watch video).

In February, NBC featured Isobel and her owners during a segment that aired during the Vancouver Olympics.

The couple owns the Bluesky Bed and Sled tour operation in Churchill.