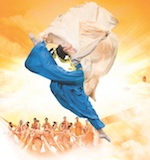 A classical Chinese dance inspired by ancient culture will fill the Centennial Concert Hall April 7 and 8.

Shen Yun Performing Arts will put on the colourful and exhilarating show, with an elite company of dancers, singers, musicians and a live orchestra. The New York-based group performed before 800,000 people around the world last year and has received rave reviews from the San Francisco Chronicle and Philadelphia Weekly.

Tickets are $39-$149 at Ticketmaster. Students and seniors receive a 10% discount.