Record Number of Campsite Bookings Made on First Day 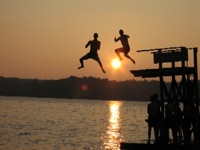 The province said Tuesday that 13,641 bookings were made for the 2010 season, which is an increase of 20% from last year.

The online system first came about in 2006, and was overloaded the first day of bookings. Upgrades have been made since its debut to better handle requests.

Most campgrounds open this year on May 14.