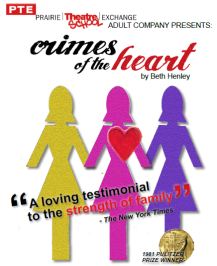 A new production at the Prairie Theatre Exchange will commit “Crimes of the Heart,” in the appropriately titled show that has been six months in the making.

The play looks at the plight of three young Mississippi sisters living in Hazlehurst. Lenny, the oldest sister, is unmarried at thirty and facing diminishing marital prospects; Meg, the middle sister, is back after a failed singing career; while Babe, the youngest, is out on bail after having shot her husband in the stomach.

“It’s a wickedly funny black comedy; very southern U. S.,” said Mariam Bernstein, the show’s director. “It’s also gloriously universal in its celebration of how we can get through the bad times with hope, laughter, and the unconditional love of family.”