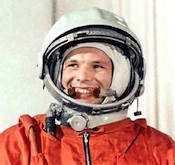 Yuri Gagarin of the Soviet Union was the first person to orbit the earth in 1961. His achievements only began being celebrated 10 years ago, and this year, over 160 parties will be held in 57 countries, which has become known as Yuri’s Night.

Our own local celebration will honour Yuri at the Manitoba Museum’s Science Gallery beginning at 7 p.m. on Monday.

Astronomer and science guy Scott Young will team up with UFO Researcher Chris Rutkowski, Mars Society local president Rob Dyck, and other scientists for a group discussion on the future of space travel — why we go, where to go, and how to get there.

Other attractions include local DJs in the Planetarium, free pizza and a contest for the best space-themed costume, with prizes up for grabs.

“Yuri’s Night is an excuse to celebrate space exploration, and to fuse science, art, music in one event,” said Scott Young, Manager of Science Communications for The Manitoba Museum. “Celebrating the anniversary of Yuri Gagarin, the first human to fly in space, we celebrate the 49 years of exploration, discovery, and technology that have followed, and we look forward to a future where humanity isn’t limited to a single planet or single place in the universe.”

More details are available on the Yuri’s Night Facebook page.