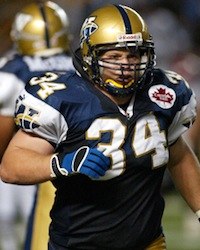 Former Winnipeg Blue Bomber Wade Miller will sit in the hot seat April 28 as part of a roasting put on by the Winnipeg Rifles.

On Monday, the Rifles unveiled who will do the roasting at the 8th annual fundraiser dinner.

QX 104 radio personality Troy Westwood will get the chance to share a few jabs at Miller’s expense. The two were teammates from 1994 until 2005, when Miller retired. Khari Jones will also be in the room to chime in. Jones was acquired by the Bombers in 2000 and led the team to the 2001 Grey Cup. Also making an appearance will be Tyler Gompf — a friend of Miller’s since grade 10 at then-known Sturgeon Creek Collegiate. Gompf is the Co-Founder & CEO of Tell Us About Us Inc.

Global TV’s Joe Pascucci will be the MC/referee.

Ticket information is available at RiflesFootball.com.

← Previous: I'm Ready for My Closeup Next: Watch Out, PGA Tour -- This Kid Is Already in Training →
Tags: Charity | Football