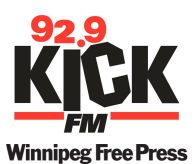 A new radio show put on by the Winnipeg Free Press will debut later today on 92.9 KICK-FM from Red River College’s downtown campus.

“Stop the Presses” is a weekly show from 6 p.m. to 7 p.m. every Wednesday that looks at the biggest news stories of the week, featuring commentary from the paper’s reporters, columnists, and callers.

Hosted by John White, Deputy Editor Online, and reporter Melissa Martin, the first show will feature a slew of guests right out of the gate. Kevin Hnatiuk of New Media Manitoba will be on air to discuss the Apple iPad, and Morley Walker will look at the publishing implications of the new device.

Also on the agenda will be Tuesday night’s City Council meeting in Glendale, Arizona on the issue of the Phoenix Coyotes lease deals, and Darren Ford from JetsOwner.com.