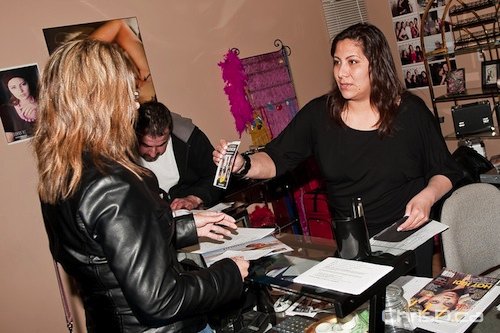 A Winnipeg casting director and actor is stepping into the role of a story she knows all too well.

Rachel Seenie (above, right) is portraying a character named Catherine in “Sorrow’s Companion” — a Jody Pacey film currently being shot in the city.

How she got the role was accomplished by reliving her own life story and transmitting real emotion to the producers on the other side of the camera.

At the age of 7, Seenie was sexually abused as a child, and her aspirations of becoming an actor were crushed. “Growing up I had low self-worth, suicidal thoughts, even tried to kill myself, [but] the rope broke,” Seenie told ChrisD.ca. She never did drugs, but started drinking at a young age and become a mother at only 17. By age 23, Seenie was in trouble with the law and spent three months in jail. If that wasn’t enough, her father was killed in 1982 when Rachel was just 11.

It was at the point looking through metal bars that made her want to change and become a better person. After her release, she got a job on the Roseau River First Nation and started to slowly save money to start her own business. After having enough to establish herself and purchase office equipment, Rachel has been in business since 1998 with her own company, R.S. Talent Search.

Now the dream of seeing her name on the big screen is a reality, as she helps cast aspiring actors in local productions. “When I was 7-years-old I would watch black and white Indian cowboy’s movies with my mom and see the credits at the end, and say to her, ‘My name is going to be there one day,’ which has happened already.”

Rachel frequently holds open casting calls for models, actors and extras. The most recent was on April 10 at Hollywood Connections on Main Street.