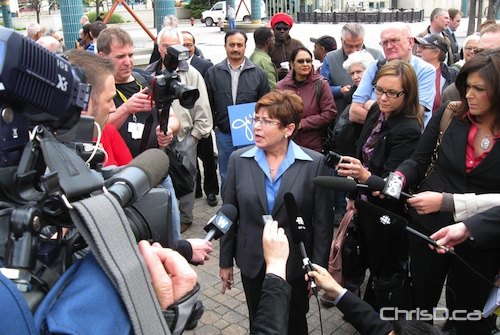 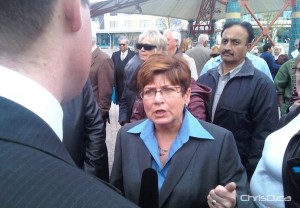 Former MP Judy Wasylycia-Leis unveiled her campaign plans for mayor Tuesday morning during a news conference at The Forks. She spoke to a crowded room of friends, family and supporters, and urged others to get involved in helping her succeed to clinch the city’s top job. JudyForMayor.com was launched as a landing page to get in contact with the Wasylycia-Leis campaign.

Incumbent Mayor Sam Katz hasn’t yet registered himself, but has said he’s looking for a third term. It’s not known when he’ll officially register papers.

Wasylycia-Leis was the NDP MP for Winnipeg North since 1997 before giving up her seat last week in Ottawa.

Registrations for candidates are being accepted until September 21. Voters head to the polls on October 27.

Mayoral candidate Judy Wasylycia-Leis speaks to media at The Forks following her first news conference as a candidate in the civic election on May 4, 2010. (WPGCAMERAMAN / CHRISD.CA)