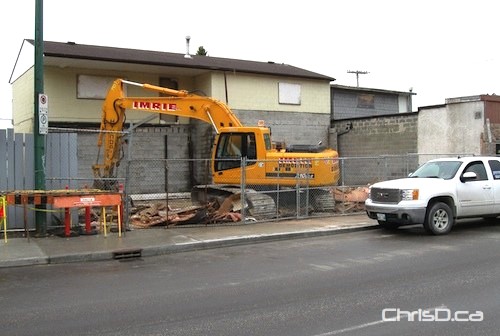 Demolition crews will be back at work today finishing up the dismantling of a derelict building at 469 Henderson Highway. The former home to Roadshow Sound and Light was destroyed by fire several years ago and has been vacant ever since. The recent rain has also caused the building to lean more than 16 inches.

On Monday, the city closed the curb lane and sidewalk on Henderson between Washington Avenue and Ottawa Avenue as bricks began to fall from the structure.

Imrie Demolition was called in by the owners of the building to begin the task of leveling it. Work is expected to be completed later this week.