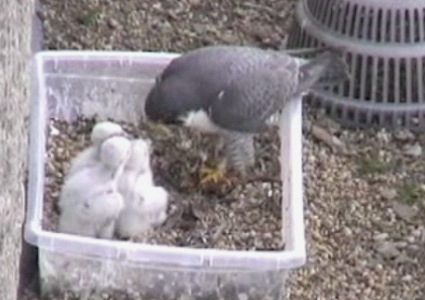 The peregrine falcons living on a ledge at Winnipeg’s Radisson Hotel have received an upgrade this season.

The falcons will now have the luxury of being under a half-covered nest box with a built-in webcam. Last year, people from around the world logged on to see the birds in their 30-storey habitat on Portage Avenue. Over one million views were accumulated in just the first month.

A joint partnership between the CBC and Shaw has provided the live stream for several years, including a view into the tragic outcome in June 2008, when several of the baby chicks drowned during a torrential downpour.

The falcon cam will go live again this year on Wednesday morning — just in time as the chicks are expected to hatch between May 17 and 21.

For more information on the Peregrine Falcon Recovery Project and to view the live feed, visit www.species-at-risk.mb.ca/pefa.