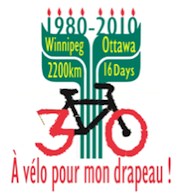 Thirty cyclists from Winnipeg will hit the road on Friday, May 14 to transport the Franco-Manitoban flag to Ottawa to commemorate its 30th anniversary.

The official departure is at 7 a.m. at Louis Riel’s gravesite near the St. Boniface Cathedral.

The cyclists will travel 2,200 km, averaging 150 km per day, in 16 days to arrive in Ottawa on May 30. On Friday, the group will travel 154 km to West Hawk Lake, and then end up in Vermillion Bay on Saturday.

A pre-ceremony to launch this initiative is being held on Thursday in the sculpture garden at 219 Provencher Boulevard from 5 p.m. to 7 p.m. with entertainment from Daniel ROA and free hotdogs.