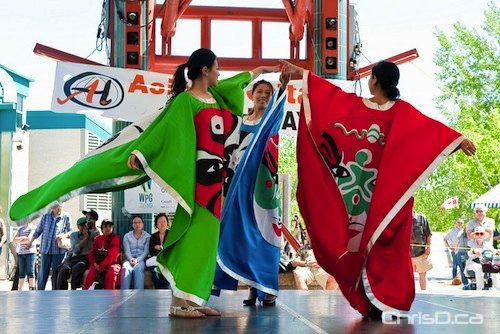 Asian dance, music and martial arts was showcased at the Asian Canadian Festival over the weekend at The Forks. The two-day festival on Sunday and Monday brought out hundreds of people to watch the performances as part of Asian Heritage Month.

This is the eighth year activities have been carried out in Manitoba since the Government of Canada declared the month of May to be Asian Heritage Month in 1993. Other cities hosted similar events, including Vancouver, Toronto, Montreal, Calgary, Edmonton and Halifax.

The Asian Heritage Society of Manitoba consists of representatives from the Japanese, Chinese, Indian, Vietnamese, Indo-Chinese, Korean and Filipino communities.

← Previous: Astronaut Robert Thirsk in Winnipeg on Thursday Next: Firefighters Responding to Record Volume of Calls →
Tags: The Forks