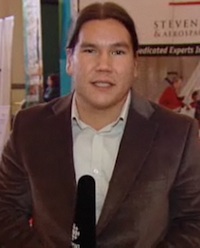 Wednesday was the last day for CBC Manitoba reporter Waubgeshig Rice in the Winnipeg newsroom. The veteran TV journalist is moving back to his home province of Ontario and taking a leave from the public broadcaster over the summer to work on a writing project.

Waub says he hopes to be back reporting news after his leave, at either the CBC in Ottawa or Toronto.

You can keep up to date with him over the summer by following @waub on Twitter.