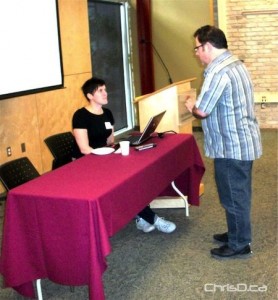 The City of Winnipeg unveiled its draft plan for the next 25 years under the Our Winnipeg project on Wednesday. Over 40,000 citizens contributed their input to the civic planning draft and gave feedback on how land development should move forward in the years to come.

The document released earlier this week contains over 100 pages of ideas the city is looking to explore.

On Wednesday, the first public consultation after the report was made public was held at Red River College’s downtown campus. Marty Gold (right) at 92.9 KICK-FM pointed out that not a single person showed up — which is evident in the photos above.

“When local publisher Bob Axford and I walked into the room today to cover the event, all the attendees were dressed as empty chairs,” Gold wrote on his blog. “Not a soul had crossed the threshhold (sic), save for 2 city planners involved with the SpeakUp Winnipeg project.”

Gold goes on to question why the public consultation sessions were scheduled with less than 24 hours notice and during the middle of a weekday. According to his post, the operators at 311 didn’t have any information on the times and locations to these sessions. An e-mail we sent to 311 referred us to the Our Winnipeg website for details.

A handful of further public information sessions are scheduled for next week, including one this Saturday at Win Gardiner Place at 1 p.m. Hopefully some people show up this time.

← Previous: Weather Not an Issue in 9th Annual Relay For Life Next: Susan Tymofichuk -- Familiar Face in the Crowd →
Tags: City of Winnipeg