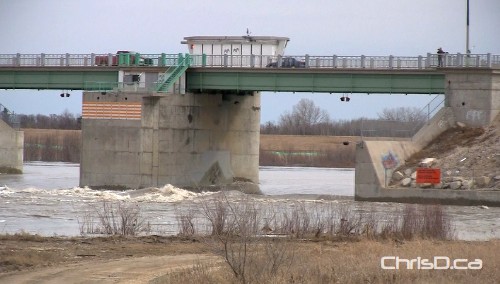 The gates of the Red River Floodway were operated late Sunday afternoon to move water into the diversion system around Winnipeg.

The province wasn’t originally going to activate the Floodway today, but updated data released by the City of Winnipeg earlier in the day resulted in a re-evaluation.

It’s not clear how long the gates will be open, but the province will assess the situation again on Monday.

More than 100 millimetres of rain fell in Winnipeg on Friday and Saturday. Many basements have been flooded as a result of the heavy rain combined with high river levels.

For more information on protecting your basement from flooding, residents can call 311 or e-mail [email protected].

The Red River is almost at 17 feet at the James Avenue station and is still rising. Current levels put the river at more than 10 feet above normal.

← Previous: Can Anybody Lend This Guy a Wet Vac? Next: Hosts Needed for Residential School Survivors →
Tags: Flooding | Red River