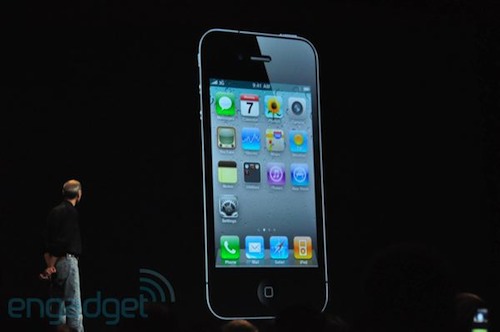 Apple released what many have been speculating about for months — the newest refreshed iPhone 4.

The tech giant’s CEO Steve Jobs took to the stage at the Apple Worldwide Developers Conference (WWDC) in San Francisco on Monday to make the announcement. Standing in front of thousands of developers and journalists from around the world, Jobs opened the keynote with some data from the app store, citing more more than 5 billion downloads since the store launched. In total, about 15,000 apps are submitted to the store each week, and 95% of them get approved within 7 days.

The newest smartphone from Apple is only 9.3mm thick, making it 24% thinner than the iPhone 3GS. The casing is comprised of stainless steel, with glass on both the front and back. The outer workings include a front-facing camera for FaceTime video chat, microSIM, camera with LED flash, headset jack, and a second mic for noise cancellation.

The design is quite similar to the model that leaked in April on tech blog Gizmodo — who was not present in the press section due to being banned for that leak. Ouch.

Display options of the iPhone 4 are nothing short of impressive, with a 800:1 contrast ratio, and a 960 x 640 retina display with 326 pixels per inch.

Rumours suggested this new version would include longer battery life, and Apple certainly delivered. With 300 hours of standby time and 7 hours of talk on the 3G network, the iPhone can go longer without seeing a charger.

The video camera on the iPhone 4 is absolutely stunning at 30fps and 720p HD quality. Another feature is the ability to edit the videos you shoot right on the spot with the iMovie app. Say goodbye to lugging around your notebook form now on.

Apple also showed off the new operating system for its devices, which is called “iOS4,” and includes multitasking, folders, retina display integration, enhanced camera and photo apps, and a plethora of other features. The new software will be available June 21 for free to iPad and iPod Touch customers.

The American pricing structure was unveiled as $199 for the 16GB and $299 for 32GB. This now puts the existing 3GS at $99. Apple said AT&T will begin carrying them on June 24, available in black and white, as well as in France, Germany, the United Kingdom and Japan. Canadians can get their hands on the new iPhone sometime in July.