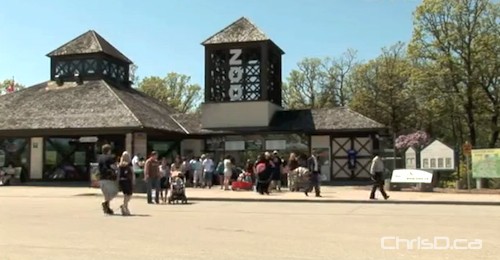 An International Polar Bear Conservation Centre will soon be in place at Assiniboine Park Zoo, after the province announced $1 million in funding for the project on Tuesday during a snow-turning ceremony. An additional $30 million in provincial cash has been committed to the Asssiniboine Park Conservancy for the first-of-its-kind centre.

Polar bear rehabilitation, research and public education will be the focus of the new exhibit, which is also backed by Polar Bears International.

The $31 million provincial commitment will include $4.5 million for the conservation centre and more than $26 million for construction of the polar bear arctic exhibit.

“Today, polar bears are being threatened by the rapid melting of the ice cap and the time to act is now,” said Don Streuber, vice-chair of the Assiniboine Park Conservancy.

The Conservancy plans to renovate the existing polar and black bear enclosures for an orphaned polar bear cub rescue centre. The old enclosures will be improved to meet provincial standards by increasing size, enhancing security and creating enrichment experiences such as sand for bears to dig and a shade and climbing structure.

Renovations will begin this month and are scheduled be completed by the end of 2010.