Queen’s Motorcade Route Gets a Run-Through 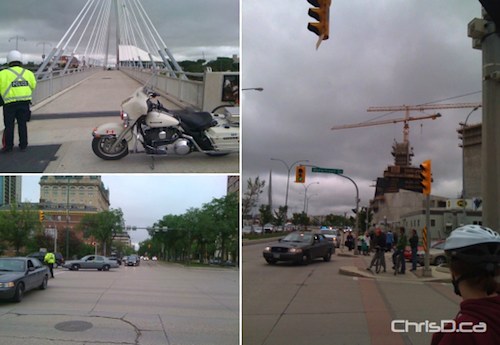 Winnipeg police on Friday orchestrated what many believe was a dry run in preparation for Queen Elizabeth II‘s visit on July 3.

Numerous streets in the downtown area were blocked momentarily while a motorcade passed through. If the practice was any indication of the planned route, motorists can expect to see the motorcade pass over the Provencher Bridge, passed the Canadian Museum for Human Rights at The Forks, and proceed down Broadway.

Some folks on Twitter suggested the emergency drill was in anticipation for the Stanley Cup coming to Winnipeg in the next few weeks. That theory was quickly ruled out when the lieutenant governor’s official vehicle was spotted travelling in the group. We’re not saying Philip Lee doesn’t like hockey, but he’d have to be a really, really big Jonathan Toews fan to ride along in Lord Stanley’s convoy.