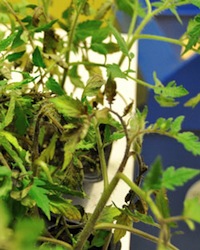 Manitoba Agriculture, Food and Rural Initiatives (MAFRI) said Monday the fungal was found at retail locations in both Winnipeg and Brandon, and can also harm other nightshade plants.

This particular fungus (right) is a serious disease issue for vegetables and weeds in the nightshade family that includes tomatoes and potatoes.

In the cases where the disease was discovered, retail outlets have pulled the tomato plants, as plant suppliers work to identify the source.

Some infected tomato plants will have been purchased by the public and planted in local gardens. Under favourable conditions, the spores on infected plants can be carried to nearby fields primarily by wind and infect other plants like potatoes. Manitoba has a significant potato industry and the spread of this blight could jeopardize the quality and market value of this year’s crop.

The MAFRI advises home gardeners to inspect their tomatoes and potatoes immediately. If late blight is present, destruction by uprooting and bagging infected plants is the best option to prevent further spread to healthy plants.

The blight does not create any human health issues.