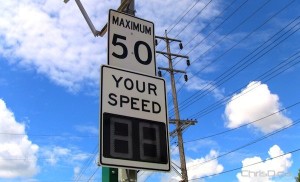 Seven of them are going up as part of a year-long $100,000 pilot project to give drivers a sense of how fast they’re going. The signs will be placed around schools, playgrounds and construction zones, Mayor Sam Katz and Winnipeg Police Chief Keith McCaskill jointly announced on Tuesday.

The LED display and radar unit signs are also being used in Victoria, BC, where they’ve proven to be successful in reducing the speed of drivers.

The signs will be placed in the following locations: