Select Teams Forbidden to Use Social Media During World Cup 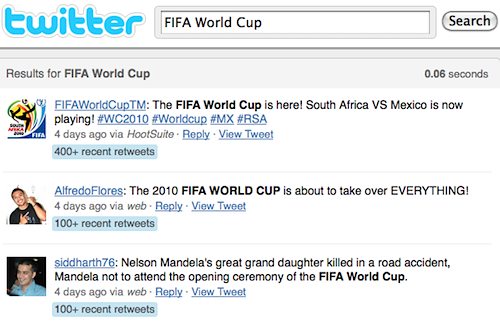 Similar to the rules other professional athletes have to follow during the playing season, FIFA World Cup officials have banned social media for some soccer teams during the month-long tournament.

Teams from Mexico, Holland, Brazil, Spain, Germany, Argentina and England will have to keep their tweets and status updates in check while in South Africa. The ban is similar to the restrictions put on alcohol consumption and sex during the cup.

A curfew has even been implemented on some teams that restrict leisurely non-social Internet access during the evening and before games.

Although, not everyone is completely anti social media. FIFA president Sepp Blatter, 71, loves Twitter. “We are on the verge of the first FIFA World Cup, in which social networking sites will play a major role in enabling all those interested in football to share their impressions,” tweeted Blatter. “I am also very happy to share my own experience of FIFA World Cup 2010 to the worldwide fans.”

But despite the head honcho’s feelings toward social networking sites, the ban remains in place for select teams based on the wishes of their coaches.

— With files from SI.com

← Previous: Too Big of a Problem for Even These Guys Next: Hank FM Loses Program Director Abbey White →
Tags: Facebook | Soccer | Twitter