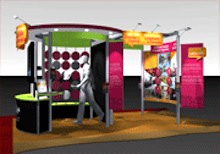 With the Red River Ex opening up this Friday, you wouldn’t think it would be a good time to ask Winnipeggers their views on Canada, but a touring exhibit will do just that.

In what’s being dubbed the ‘biggest Canadian conversation ever,’ The National Capital Commission is bringing its travelling “Let’s Talk! Canada’s Capital” exhibit to the Ex June 18-27. The exhibit encourages Canadians to voice their thoughts and opinions on this great land.

Comments will be recorded on video and will play on Parliament Hill in Ottawa, and online.

It’s all part of the Canada Pavilion, which is part of the Government of Canada Exhibitions Program.