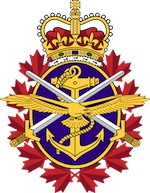 Nearly 450 Canadian soldiers will make a return to their home base of CFB Shilo on Sunday afternoon.

The soldiers are returning from a tour of duty with the Canadian military contingent serving with the NATO led mission in Afghanistan.

The men and women will arrive back at approximately 12:30 p.m., where a public steak BBQ will follow in the outdoor field on the corner of Patricia and Engineers Roads. Live entertainment will be provided.

This is the latest round of soldiers to return to Shilo in recent months. In May, two groups of Shilo-based soldiers made their return home.