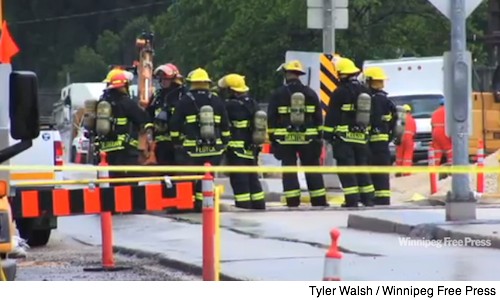 McPhillips Street has reopened after a gas leak Monday afternoon forced emergency crews to close the street between Logan and Selkirk Avenues.

Construction crews near the McPhillips Station Casino punctured a gas line at about 2:45 p.m., which sent gas spewing into the air. Employees of the casino were evacuated and retreated to a nearby hotel while they waited for the all-clear. Homes and other businesses were also evacuated.

Manitoba Hydro says the leak was capped shortly after 5:30 p.m.

Motorists in the rush hour commute were forced to use Keewatin Street and the Slaw Rebchuk Bridge as alternative routes.

Some lanes in the immediate area may still be blocked off as emergency vehicles are cleared away.