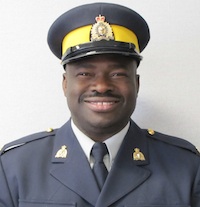 The RCMP “D” Division introduced a newly-appointed Cultural Diversity Officer on Tuesday, a member of the Contract and Aboriginal Policing unit, to strengthen and promote positive relations between the RCMP and visible minorities in Manitoba.

Corporal David Ogungbemi is an RCMP member with 17 years of service and will travel to rural and urban Manitoba communities to hear the concerns and suggestions of visible minority community members and service providers, and to work closely with them to improve police services.

“Manitoba is a culturally diverse province and while the RCMP is a diverse organization, we are always looking for ways to reach out to visible minority groups,” said A/Commr. Bill Robinson.

The new Cultural Diversity Officer position follows last year’s assignment of two RCMP members as communications liaisons in the offices of the Assembly of Manitoba Chiefs and the Manitoba Metis Federation. These assignments have strengthened relations and communications between the RCMP and First Nation and Metis communities.