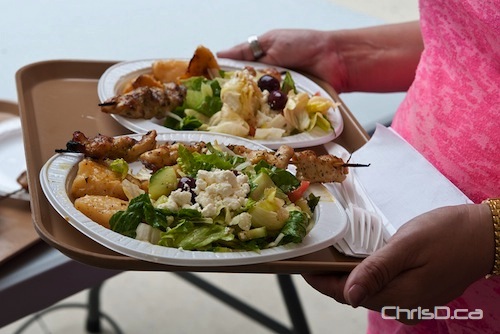 The annual Greek Fest filled the St. Demetrios Greek Orthodox Church over the weekend, as crowds were treated to cultural entertainment and an array of traditional Greek food.

The three-day festival had about 400 guests on Friday, but organizers were expecting double that number on Saturday night. On Sunday, the Toronto group “Atlantis” played three shows on the grounds. Thankfully, most of the action was inside tents, as those in attendance weren’t complaining about the mosquitoes.

To make things even more eventful, a couple tied the knot in the church’s chapel adjacent to the festivities.

← Previous: Tour the Outer Workings of the Human Rights Museum Next: Thousands of Paws in Motion for Humane Society Fundraiser →
Tags: