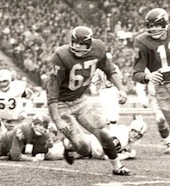 Some sad news from the Winnipeg Football Club Wednesday morning — Blue Bomber legend Frank Rigney has passed away. He was 74.

“Frank was a tremendous football player during his time in Winnipeg,” Blue Bomber President Jim Bell said in a statement. “He will always be remembered as a champion throughout the province of Manitoba.”

Rigney was drafted in the 4th round of the 1958 NFL Draft but would end up playing ten years along the Blue Bombers’ offensive line. The three-time CFL All-Star won four of the five Grey Cup games he played in with Winnipeg, and was named the Western Division Most Outstanding Lineman in 1960 and 1961. In 1984, Rigney was elected into the Canadian Football Hall of Fame and into the Winnipeg Football Club Hall of Fame in 1985.

Rigney was a regular colour commentator for both the CBC and CTV football broadcasts following his football career.

He resided in the West Vancouver area until his passing.