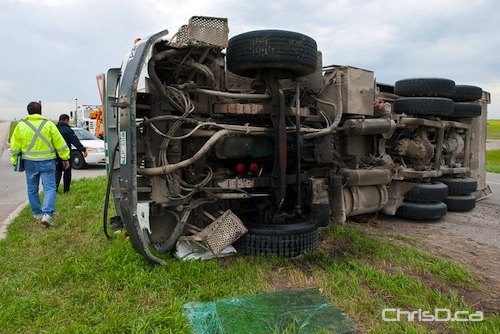 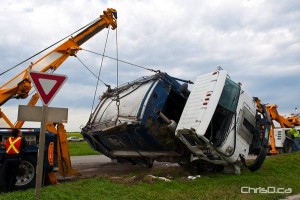 A garbage truck rolled on the South Perimeter Highway late Wednesday afternoon, snarling traffic in the westbound lanes as crews worked to clear the scene.

RCMP say the accident happened at about 4:30 p.m. near the Brady Landfill site.

The driver of the truck was taken to hospital with unknown injuries, but police on scene tell us they did not appear to be serious.

Traffic was blocked in both directions for roughly five minutes as the truck was righted.

No other vehicles were involved in the collision.

On June 23, a garbage truck rolled on Inkster Boulevard.

← Previous: Three Winnipeggers to Be Invested into Order of Canada Next: Canada Day Parking Hard to Come By for Revelers →
Tags: Accident | RCMP